So... You decided to make your life more interesting ... And it has never occurred to you which way to do that ... Well, you will never have a more interesting way than this! How about jumping from a plane from an altitude of over 3,000 meters, a sudden loss of altitude, a speed of 220 km / h, and the strongest adrenaline rush through the veins you have ever felt in your life? Šta kažete na skok iz aviona sa visine od preko 3.000 metara, naglom gubitku visine, brzini od 220 km/h, i najjačoj jurnjavi adrenalina kroz vene koju ste ikada u životu osetili?

Sounds tempting? Then you are in the right place! On these pages, you can find out what a tandem parachute jump is and roughly understand that it is the craziest thing you will ever do in your life..

And how will you perform the jump?

Before you decide, read the most frequently asked questions (FAQ). Very simple!

If there is no desired time when you would like to jump, contact us via the link "Buy a ticket" so that we can meet you and perform a jump with you when it suits you. 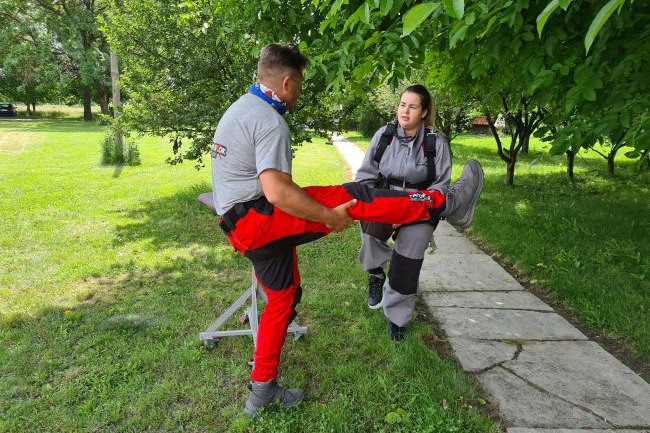 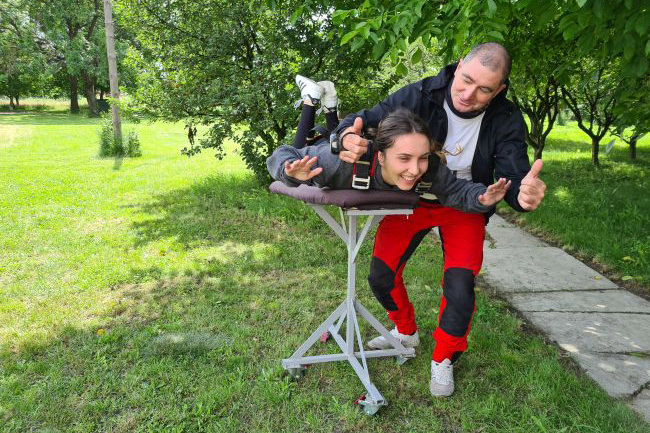 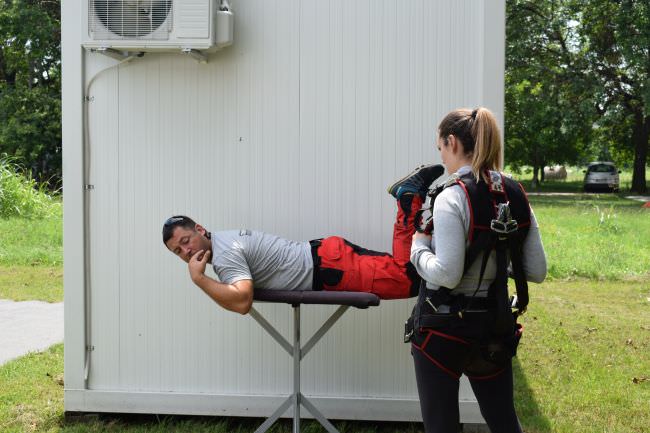 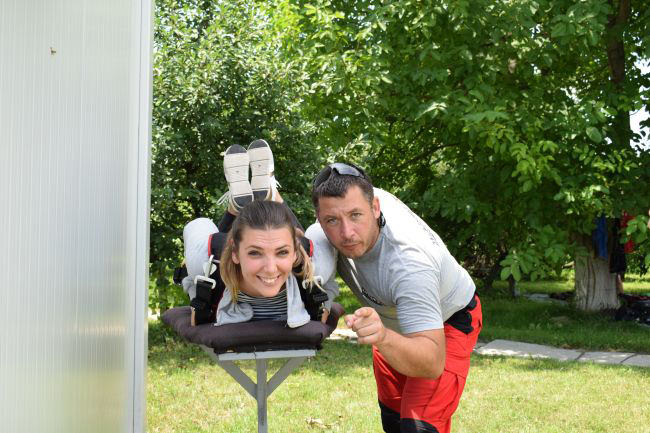 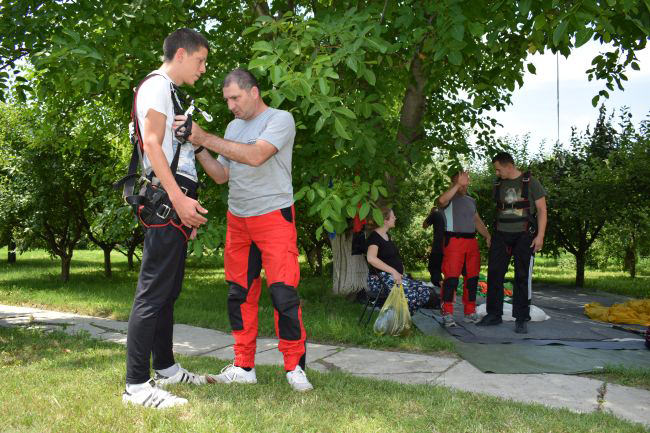 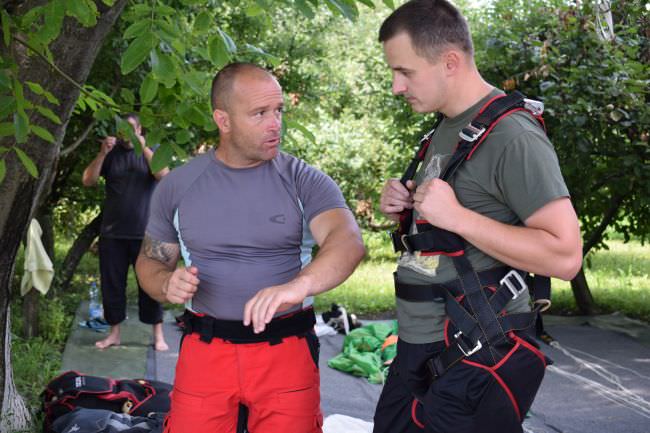 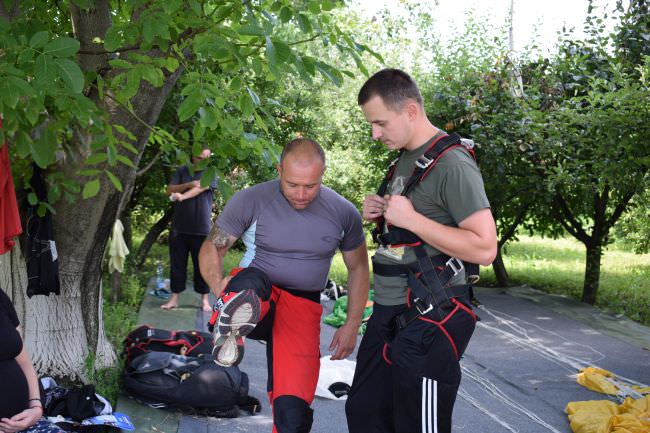 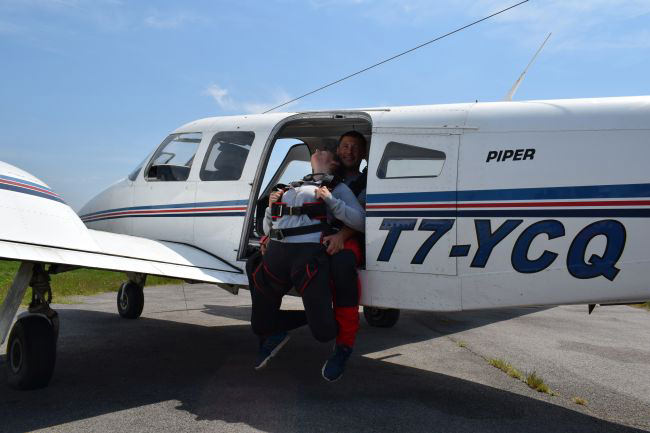 Before that, watch our tandem jump videos by simply clicking on VIDEO. You decided you want to try it? From that moment, your preparations begin: come to the airport, depending on how many passengers there are on that day, you may have to wait a bit (an hour or two), and if not, you will start with the preparations immediately.

Preparations include a short training by your instructor, who will explain to you what you need to do during the jump.

No, don't worry, you won't have to do everything! On the contrary. The instructor will teach you only what to do on the plane, and of course to dispel any fear (if you have it). Believe me, all this has been done many times, and it is very safe. After the "ground" preparation, you will go with the instructor to the plane from which you will jump out and practice the separation from the plane on it, while on the ground. and that is it! You are ready to jump. From us, you will receive an adequate suit (overalls) if it is cold and adequate protection for the head (hard or soft helmet). On the ground, the instructor will set up a system of ties, which will keep you tied to him throughout the jump. No, don't worry ... You won't fall out. The binding system you carry is designed to withstand 10 times the weight (even when opening a parachute) than yours. And now...

How much happiness you experience in those few minutes, how much adrenaline, how many situations, you will never be able to feel again, except on the jump. Perhaps the best description of the jump was given by Leonardo Da Vinci:

"Once you have tasted flight, you will forever walk the earth with your eyes turned skyward, for there you have been, and there you will always long to return."
Without any dilemma exactly. In every segment. But let's try!

Getting on the plane. The engines start, the propeller turns ... The plane rolls to the runway, it starts ... it takes off.

The plane takes off a few meters ... a few HUNDRED meters from the ground. You are not alone! There are 2 more people on the plane with you who are also jumping for the first time and everyone has their own instructor.

The pointers of the instructors' altimeters show the increase in height, they laugh, and you can see in their eyes that they are impatient to jump. They ask you how it is? Where are you from? So what's new? Quite ordinary things ... It's ringing in your ears ... The man jumped!

So from that moment on, you are one of us, our society. Paratroopers on the plane capture you with their GoPro cameras mounted on your arm. They smile, and remember their first jump. The view of the clouds leaves you breathless ...

And they are there - you can touch them, and you will, just a little more. At one point, the pilot of the plane raises two fingers, and says: "two minutes!". Two more minutes! The body is shaking ... you don't know what awaits you ... "What did I need this for?" - it rings in your ears ... Suddenly the pilot reaches out and opens the door, the wind makes a noise. Parachutists greet each other by touching their hands in a way known only to them. 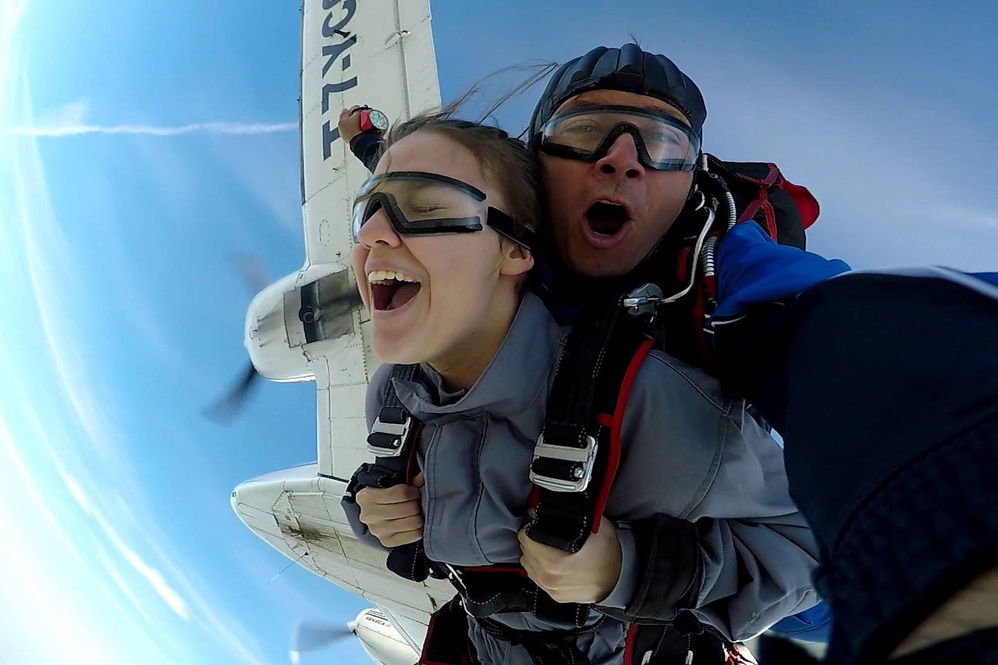 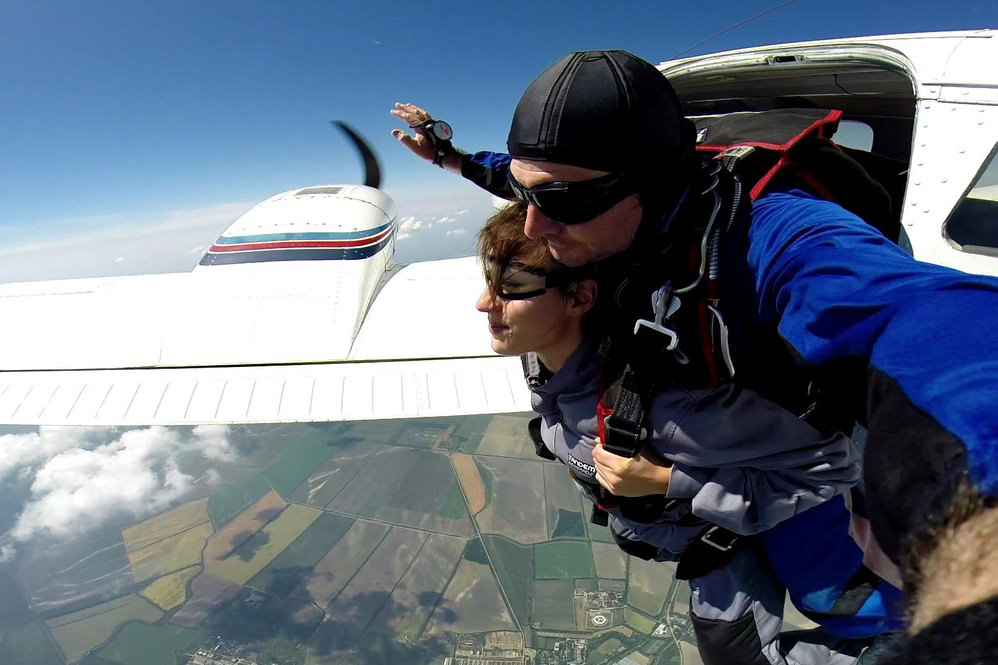 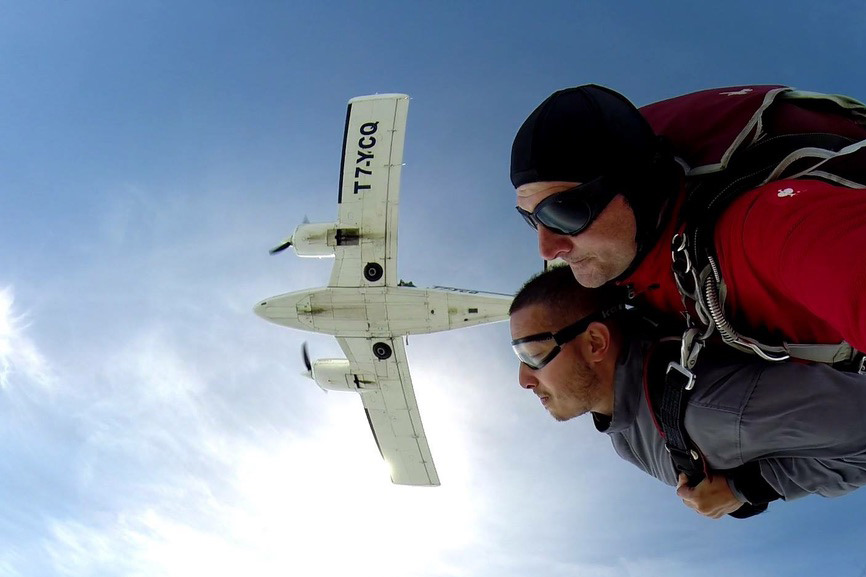 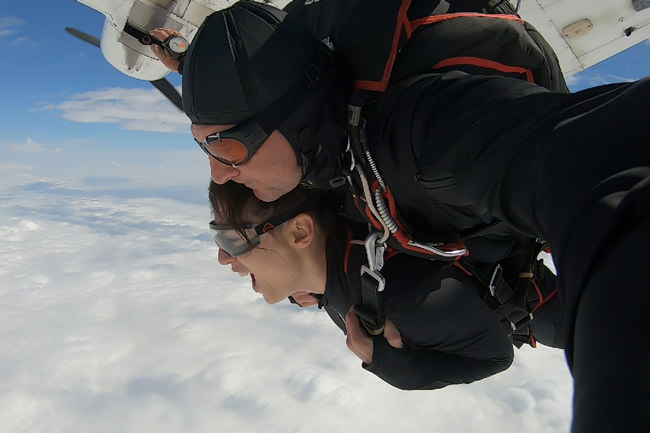 The first paratrooper stops on a slipper. He turns to you and shows you a thumbs up !!! This man is crazy! Suddenly his body turns to a point, he jumped! The man jumped!

Another parachutist jumped, ''He is crazy as well!''- it goes through your head. The parachutist raises one hand, greets you, and goes the way of the clouds! Your instructor is slowly approaching the exit with you. You throw your feet out, the wind carries them, but you put them back on a stable support, and you are outside!

Looking at the camera attached to the arm of your instructor pulling you back, you hear him shout "Wriggle!", Immediately afterwards you hear: "READY ... SET ... GO !!!!" You haven't even heard this "GO" properly, and you realize that your body is moving at an enormous speed - down! You are not sure, but it seems to you that at one point during the crash you saw a plane that gave you a sense of security during the flight, how it took off ... THAT'S IT !!! You still don't know what's going on, and the wind is blowing around you like never before. Suddenly - you feel like you're floating! You are lying in the air! You look below. See the Earth! You see a beautiful panorama. You are counting on how fast it is approaching ... "Well, this is not as fast as I imagined" - you think.

Suddenly you feel a strong force pulling you up. "Look down!" - shouts the instructor. And you are watching ... A parachute in free fall, a scene you have never seen live ... His body shrinks and at one point you see a colorful piece of silk beneath you. The parachutist opened the parachute, and only then do you realize that your parachute has been open for a long time! So it was that force that pulled you up, but so gently that you practically didn’t even realize what was going on.

And only now you realize that there is perfect silence around you ... You only hear the faint sound of the wind, and that's it. Nobody is shouting, dogs are not barking, car and plane engines are not heard ... Just perfect silence ... You can't believe this is happening ... You hear a voice behind you "Huh? How is it?". It’s the voice of your best friend that day. It is the voice of the instructor that keeps you attached to yourself. You don't believe what you see. 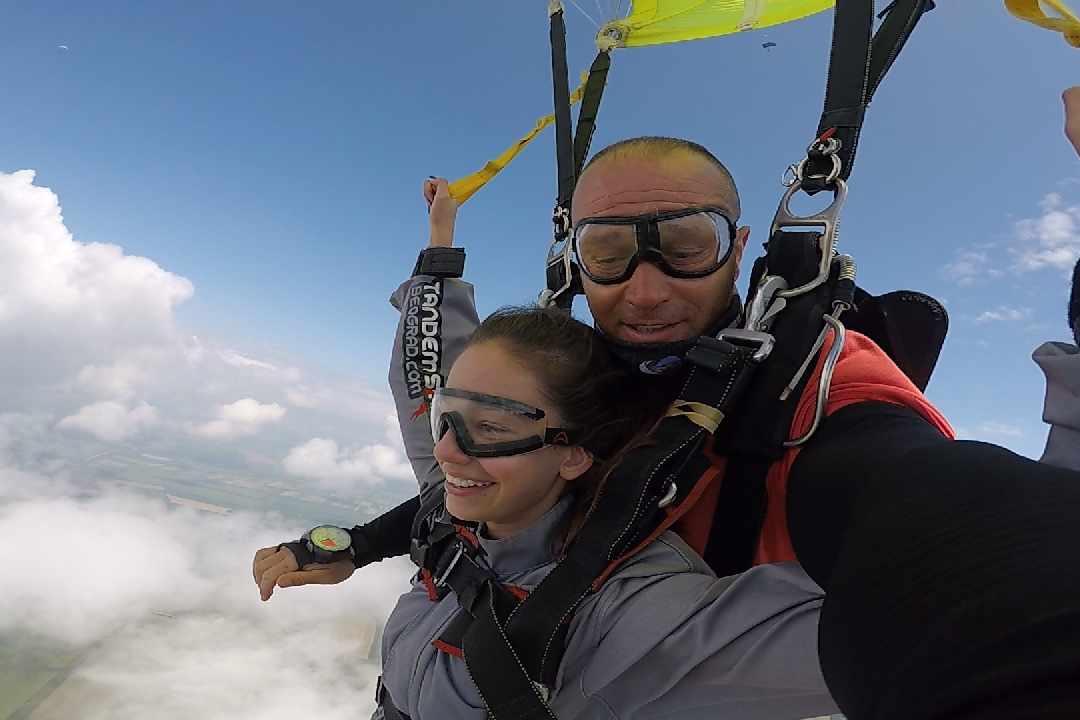 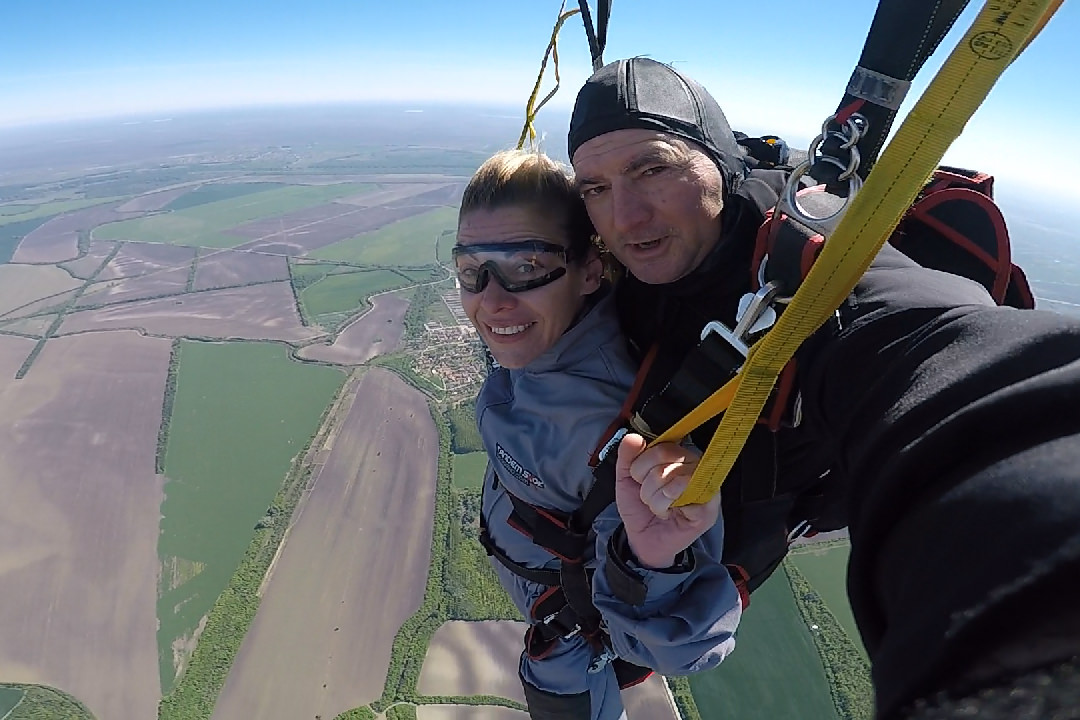 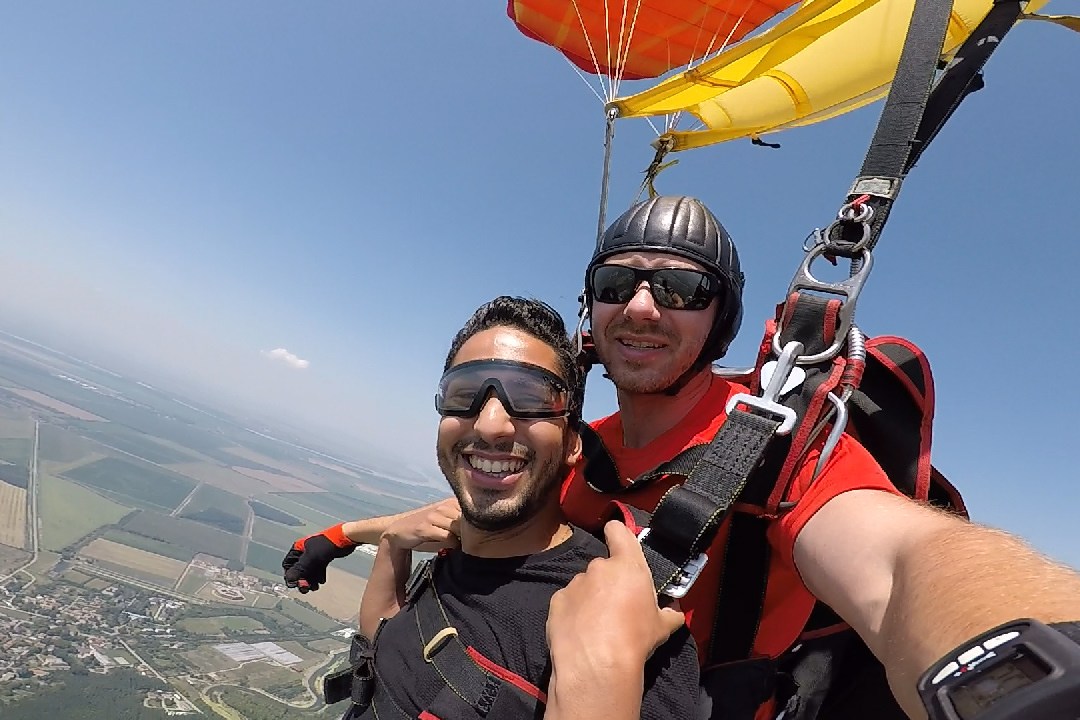 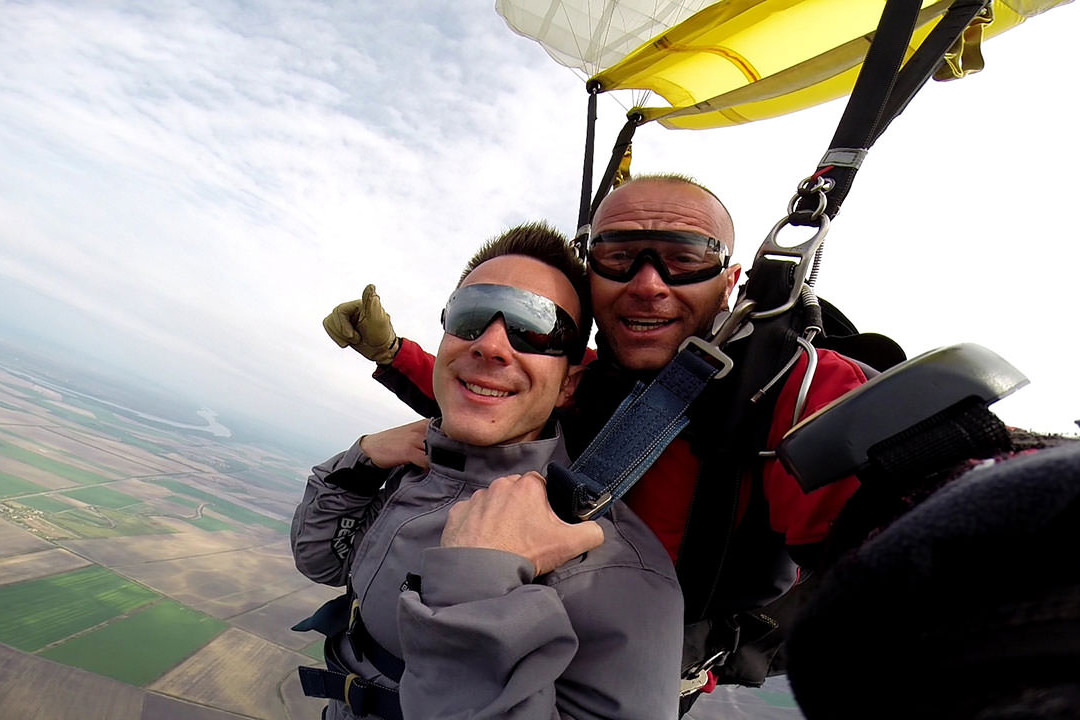 The scene below you is not just fantastic, but the most fantastic scene you have ever seen! No noise, nothing, just you and the instructor in the void, with a huge white dome above your heads. Nirvana ... The unity of your body with the sky ... Now you know that the saying you heard down on Earth, which you thought was a "parachute trick", is not without basis. "Only paratroopers know why birds sing ..." - it rings in your ears.

The Earth is approaching slowly. You suddenly realize that all those planes are lined up below, and which you see perfectly, in fact, the airport from which you took off and where you land. You begin to recognize people, planes, cars ...

The instructor turns the parachute toward the clearing. You hear a voice behind you "Raise your feet!" You grab the jumpsuit around your thighs and pull your legs up. "Opaaaaaaaa!" - You hear from behind. You landed !! Unbelievable! It's like sitting on a bed or jumping off a chair. 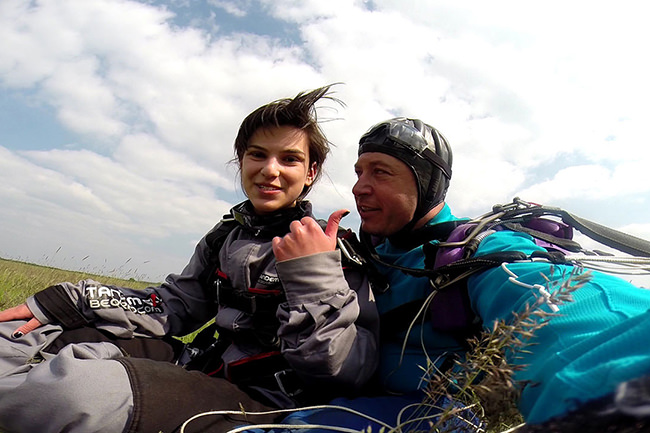 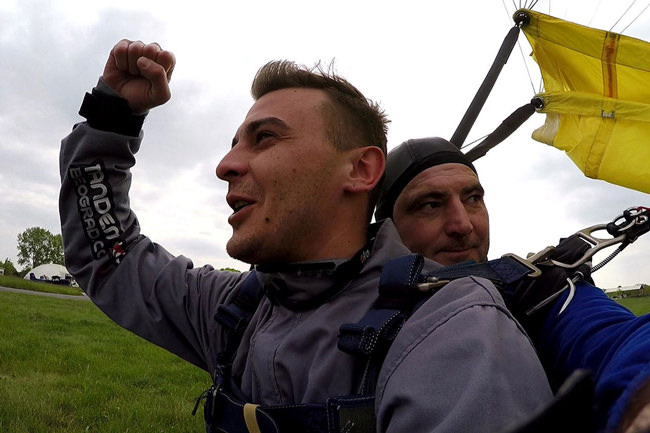 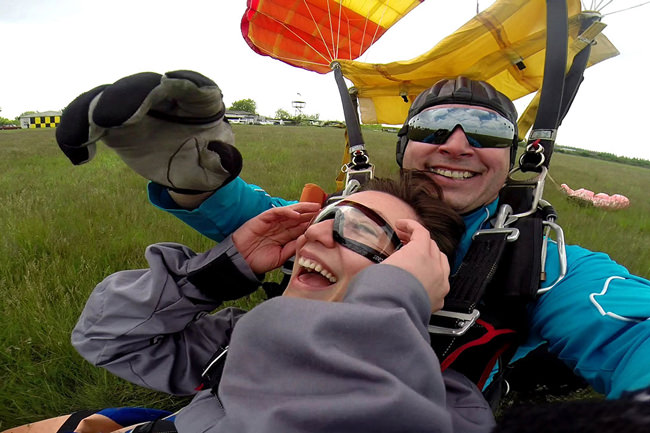 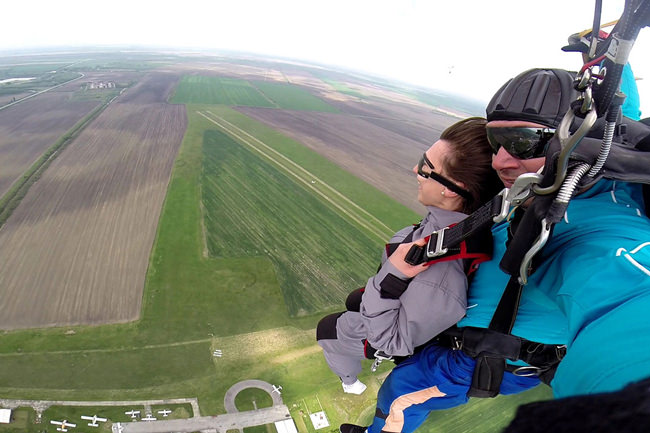 "Oh God, we landed!" - you think to yourself ... But ... The instructor takes you away and asks how it was. You can't get the word out. You would like to say something, but words simply do not come out of your mouth ... Air does not enter your lungs ... Suddenly ... You open your mouth, breathe in the air and scream with all your strength !!!

You are approached by paratroopers, the same ones who were with you on the plane, the moment before you experienced - what? How do you describe it now? Congratulations. They're smiling ... Is it true that at first, you thought it was good that you could hardly wait to land? You look up ... You can't believe that so much sky was yours for those few minutes ...

You are now a parachutist !!!

Jumping from various aircraft used to be very strange, even very dangerous. Throughout their history, humans have tried in various ways to jump out of spacecraft freely and land safely on Earth.

Today, it is so safe that the chances of anything unwanted happening to you on the jump are reduced to per mille.

Let's say you're more likely (statistically speaking) to win a week in the Lottery, or (God forbid) to die in a car accident on the way to the airport. There is definitely a risk. But the risk in what sense? You're probably driving a car. The moment you get in the car, even if you cross a shorter distance, there is a danger that you will have (again, we say, God forbid) an accident. But that's why no one will stop using a car, right? It is the same with this topic. Even as we said, the chances of something happening are less than in the above case.

The problem with most people is that they think that it is generally accepted that everyone drives a car, but it is unusual (we admit, true) for people to jump off a plane ... But as in the previous case, that does not mean that you will not. Right?

And again, we must return to one indisputable fact.
Every second of the jump will cut into every segment of your brain, into every pore of your body. The feeling of perfect calm and union with the element that is most prevalent on our planet (air), after opening the parachute is something that you will "roll" on your head for a long, long time after the jump.

And if your memories fade in any way, you will definitely be filmed while jumping, so you can always watch a video of your jump on your device or on our Youtube Tandem Jump Belgrade channel, and remind yourself of the craziest adventures in life. As for safety in general, a tandem instructor said it with a smile on one occasion:
"The only danger in sports is that you like it very much. Then you are just like us. You have a parachute and nothing more in the house ..."